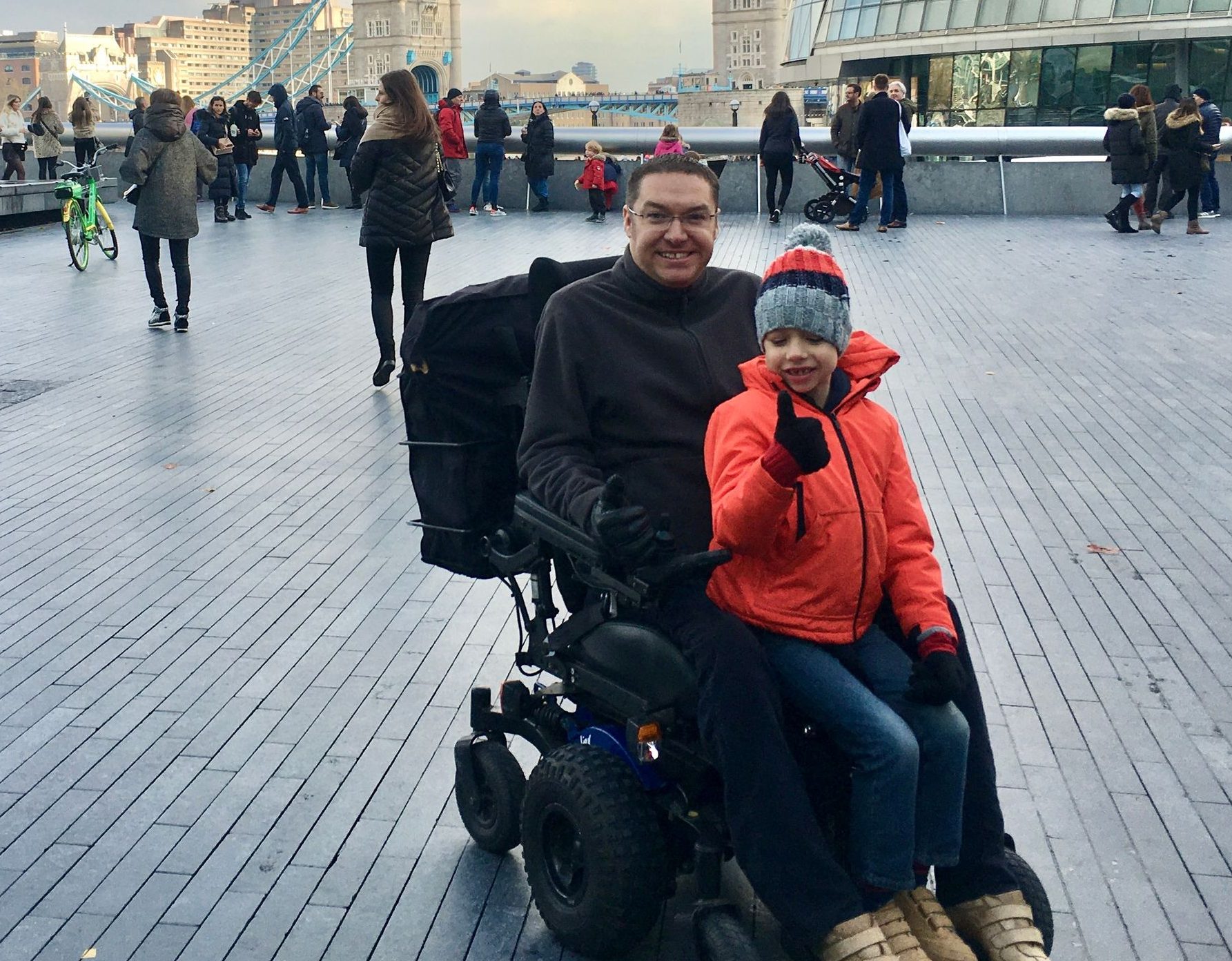 In this episode of Access All Areas, Cory spoke to Andrew Robertson of the YouTube channel “Spin AT Lightspeed” about travelling as a disabled father. They talked about their travel experiences around the world and what it’s like to travel as a powered wheelchair user and a dad/son team.

Below is the transcript of Cory’s discussion with Andrew about Travelling as a Disabled Father.

Cory: From your YouTube channel. I’ve been watching it over the past few weeks. And it seems like you’ve definitely done a lot of travelling. I think you have a lot of valuable experiences travelling as a disabled father that we can talk about. But to start us out, can you please tell everyone who you are and what your disability is?

Andrew: I’m Andrew Robertson. I’m 40 years old. I’m from Canterbury, in deepest, darkest Kent, just outside London. I was diagnosed with Muscular Dystrophy when I was 18. I have adult-onset limb-girdle muscular dystrophy. So it’s only a muscle-wasting disease of the shoulders and legs, I say ‘only’ but they’re quite important, without the muscles in the arms and legs walking is particularly challenging.

I had probably 10 years of walking with a stick between my 20s and 30s. Then it was time to use a power chair. I remember researching lots of different power chairs. As I was looking through YouTube I found a guy with a similar type of muscle disease. He had taken his wheelchair backpacking around Asia, I think his Youtube channel is called Beyond the trail. He had a student film crew that followed him. I thought ‘Wow, this is amazing that this chair is all-terrain!’

Having an all-terrain chair, I think pushes me to try and go out a little bit more. Beyond off-road or just places that you wouldn’t normally see a wheelchair.  My son came along in 2013. There were the early years when it was very difficult to interact with a baby when you can barely hold them. But as soon as he got to about three he would love to sit on the chair and he still does now, he’s eight years old. All of a sudden I realised I could strap him to me and I didn’t have to worry about him running off. Over the years different carers that I’ve had have given me more confidence. I don’t know if you feel the same thing, Cory? It starts to snowball when you get confidence. You just get that momentum and you’re like, right, where’s next?

Cory: Yeah, definitely the same for me. I think the first time that I went to Europe, I went to Germany and Austria. And then after that trip, I was hooked. I thought if I can do this, and have such a great time, then what else is out there? That just pushed me to keep going further and still going further even to this day, just taking more and more challenging trips every now and then. It’s been so much fun as I’m sure it has for you as well.

At the beginning of 2021, you actually launched your YouTube channel, Spin AT Lightspeed. So it’s fairly new, but you already have a ton of content on there for people to see about travelling as a disabled father. What inspired you to finally launch a YouTube channel?

Andrew: Thomas is the inspiration. When young kids turn about five or six they start watching YouTube. They’re seeing YouTubers and they’re starting to talk the lingo. We bought a GoPro and he was filming everything and talking into the camera, and saying things like ‘Hey guys, comment down below if you want to see this.’ Eventually, he asked where his channel was, and I said, well, you haven’t got one, we’re just filming these, these are home movies.

The more we were filming the more content we were building up and we realised that this could become a channel. We spent a long time coming up with the name and what the purpose would be for the channel. In the beginning, Tom would just jump up on the chair and spin around. ‘AT’ represents Andrew and Thomas so we decided to call it Spin AT Lightspeed. I just googled it to see if anyone else had that name and I found out that black holes spin at lightspeed. So, the deeper meaning for me, is that having a disability, I always want to be positive.

I love that about you, Cory, you’re always positive even when things go wrong. For example, when I’ve seen a picture of you where there’s a lift that’s broken or something like that, you’re always smiling. For me, spinning at lightspeed is what a black hole does. And we’re trying to keep ourselves out of the black hole, trying to be positive. I wanted to have something every Friday, to make sure there was a new video coming out regularly. When we launched, we had 47 pre-edited videos all scheduled. At the beginning of 2020, we had loads of ideas for new videos, we had a trip to Florida booked, also Washington, New York and across to San Francisco. Then, of course, everything got locked out. We were stuck with filming in the garden and trying to come up with ideas for episodes, as we couldn’t do much travelling.

Cory: Not only do you dive into destinations that are accessible and travelling as a disabled father, but you recently published what it’s like to get on a plane as a wheelchair user. So a lot of really helpful information on there that isn’t just the fun side of travelling, but also really useful information which I found helpful when I was browsing your videos. What all kind of content can people expect to see on Spin AT Lightspeed?